In researching Leave No Trace (LNT) ethics, I kept being told by members of our office, "go to the LNT guy: Tom Polk!" In learning about LNT from Tom, I learned a lot about his passion for the environment and a bit about his 25+ year history at Outward Bound. Read on!

LNT stands for Leave No Trace. (When I took my LNT masters program they gave us so much paperwork they said it meant “Leave No Trees.”) 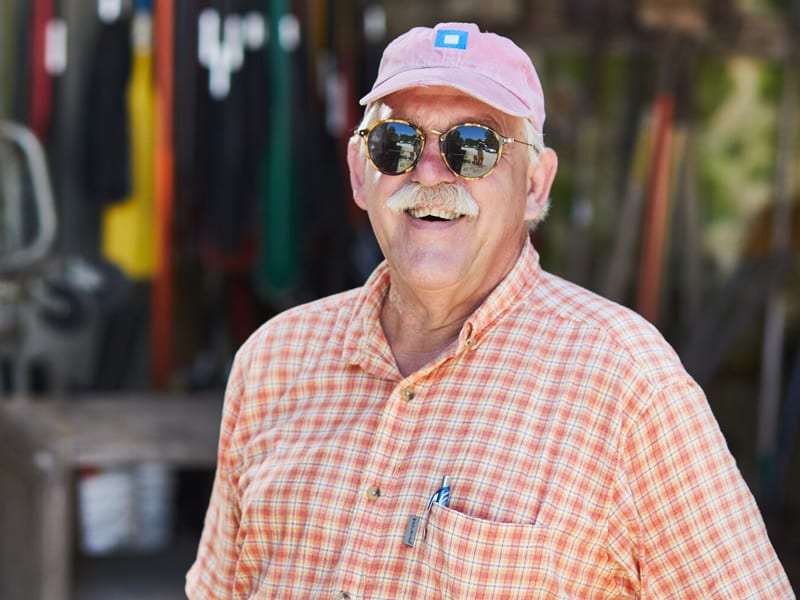 Leave No Trace is just that: When we’re going into the wilderness, leave things as pristine as possible. So it’s a set of guidelines to how to behave best in the wilderness. They’re not rules, so it doesn’t say “you can’t do this,” but, “if you can avoid doing this, it would be great.”

How long have we practiced it at Outward Bound?

I think probably ever since it started. I started working for Outward Bound in ‘92 and we were talking about Leave No Trace at that time. As far as I know it’s always been part of our mantra: We should feel like we’re stewards of the earth, so we should be trying as hard as we can to keep things as pristine as possible and following the guidelines of Leave No Trace. We still continue to teach it to our new staff, of how best to practice in the field.

What are examples of ways we practice LNT in the wilderness?

There are a lot of ways. The guidelines from the beginning are plan and prepare, knowing what you’re taking out in the field and where you’re going and how you’re going to interact, so you can plan how to be the least intrusive and be prepared for that.

Another is packing our food—it’s not taking food that’s all in small packages but buying in bulk and repackaging as much as possible. I do small things, like if I’m taking cans of chicken or cans of anything I take the labels off before I go out in the field and put those paper labels into the recycling.

“I feel really strongly that we should be practicing LNT as often as we can. We are the role models, and I feel like Outward Bound should be the preeminent steward of the earth and trying everything we can to minimize our impact and LNT, I think, should be part of our lives.”

LEARN: The 7 Principles of Leave No Trace

I really encourage our instructors to really emphasize LNT out in the field with our students. I feel like it’s our responsibility to teach it to the kids that come out on Outward Bound courses. For a lot of them it’s the furthest thing from their mind, particularly inner city kids. So I encourage them to try and separate their trash so that when they come back they can sort recycling—like they may be taking cans of tomato paste or cans of chicken out, I’d like to see them rinse them out and bring them back and put them in recycling.

I think an interesting thing with kids from the city is, if you look at Baltimore City, in the city, there’s trash everywhere. So what does it mean if you have a candy wrapper to just drop it and get rid of it? Why put it in your pocket and save it to put it someplace else later? So, that’s their mindset. One of the only things they can control in a dirty city is themselves—They can have really clean clothes, really clean shoes, nice, clean, cool stuff. Then we take them out to the woods and it’s a 180 completely. We say, “Who cares about your clothing and your shoes? Get them muddy. But pick up that microtrash, that little piece that came off the wrapper, or if they drop food, pick it up and eat it.” And they’re, “Are you kidding me? Why would I pick up food from the ground?” Some kids really get it and make fun out of it. I’ve seen kids, just joking around, they’ll throw a piece of food on the ground and go “I can’t eat it until it’s on the ground!”

I feel really strongly that we should be practicing LNT as often as we can. We are the role models, and I feel like Outward Bound should be the preeminent steward of the earth and trying everything we can to minimize our impact. And LNT, I think, should be part of our lives—I practice it as much as possible at home, not using paper or plastic products and stuff like that. I know it’s hard, from a course, separating stuff, but I’ve also been to bases that are really careful about it and that culture. I was at a base where every Spring they bought piglets and they would eat compost, so courses in the field would separate compost just so they could bring it back to the pigs.

It was very cool!

In the staff kitchen there were two buckets: one was for pigs, one wasn’t. So you put coffee grounds or egg shells or orange peels in the one; you put tortillas and beans and rice in the other one.

That’s awesome. So that’s one way to practice at home. Are there any other ways, especially in the city, to practice LNT that kids can bring back to their homes and families?

I think there’s lots of ways. For one, I do the shopping for all the food and gear, and I always take my own bags in so we’re not using plastic bags.

I always take my own shopping bags in. When I forget and have to use a plastic bag I’m putting as much in there as possible.

I need to start leaving a few in my car.

I have a dozen of them in my car. But sometimes, like once I walked into Walmart and I’d forgotten my bag. I finally got one cashier who totally understood it, and he worked really hard at putting as many things in there as possible. And like, why would you put a gallon of milk that has a handle in a plastic bag?

Another thing is Baltimore has stopped the use of styrofoam, and one of the really cool things that has popped up this Spring, and I’m so aware of it now and see it all the time, is not using plastic straws. As Outward Bound we should be educating everybody in that!

Is there any particular reason you’re so passionate about LNT? I hear from everyone that you’re the LNT guy, and I wondered why that is!

I don’t know why I am! There are some traits and some things about me that probably point to that all the time. One, my undergraduate degree is in archaeology and that’s just poking through old people’s trash.

I always reuse things as much as possible and always have. My mother was a tiny little bit of a hoarder and I might have a tiny little bit of that—it’s not overwhelming, my house is pretty nice—but I see some things, and see ways to repurpose them rather than throw them away, and definitely don’t buy as many new things.

My father was in the army, and as a kid I always wanted to be Special Ops. I was always sneaking around and spying on my sisters, not leaving any trace of myself, and I always tried to figure out how to do that. Growing up my mom and dad had seven kids—I’m number six—and I remember my mom said, “you can eat whatever you want, but you can’t leave a trace.”

As a kid I went to the max on that. Say I wanted to make a bologna sandwich. I would get the bread out and mayonnaise it, and then I’d put the mayonnaise jar back exactly the way it was, you know, the label right where it had been, and take the bologna and put the bologna package back with the label the right way, wipe off the counter and eat my sandwich. You couldn’t tell I’d been in there. That’s a really smart mom.

Also lots of friends of mine have had farms. They emphasize that you have to leave things the way you find them or you're not welcome on a farm. When you open a gate and go through it, you close that gate. You open a door, you close the door. You put tools back where you found them so other people can find them where they are, don’t just drop them where you used them.

So those are some experiences of mine—they sort of all point to the same thing. People will say they see me downstairs after crews come in poking through the trash, “why is this in here,” ‘why is that in here,” “how much of the food can we reuse instead of throwing away?” 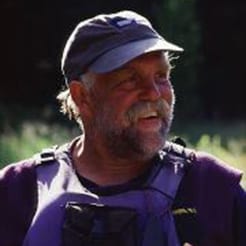 Born in Salzburg Austria, as an Army brat with 6 siblings, Tom lived in a lot of places which inspired his passion for travel. He has a degree in British archaeology from New England College in Arundel, England and practiced Archaeology for 11 years in Scotland, London, Wyoming and then back east in Williamsburg, Annapolis and downtown Baltimore. Tom then decided to go into teaching so he got a M.Ed in instruction and curriculum from Loyola College in Baltimore. Tom is an outdoorsman so he became enticed with the idea of experiential education. In 1992 he decided to work for Outward Bound rather than a traditional class room setting. He has had the great privilege to work a huge variety of courses in a lot of different places.