Baltimore and D.C. string together one of the most densely populated and traffic-congested metropolitan areas on the East Coast. Therefore you wouldn’t imagine that kayaking on the Chesapeake Bay that borders it could feel surprisingly remote. Perhaps the factor that prevents me from considering this kayaking experience remote, insofar as it wasn’t entirely peaceful, is that I was travelling in a cadre of fifteen.

Thirteen Outward Bound instructors, one paddling expert, and myself (desk jockey) hopped into a shiny new fleet of boats and paddled the Northern most arc of the Bay recon-mission style, marking the launch of Outward Bound Baltimore’s Chesapeake Bay Sea Kayaking program. It wouldn’t have been possible without the work of inspirational environmental stewardship group, The Chesapeake Conservancy, which has been a strong and generous force behind helping us “put the Bay back in our name”.  (Our school has not run courses on the Chesapeake since pulling boat sailing in the early 2000s.)  But we’re back, this time retracing a 30+ mile portion of the 1607-1609 passage of explorer Captain John Smith and his crew.

“I want to tell you that I’m thrilled to be here for the start of an exciting time in the Conservancy’s life,” Joel Dunn, Executive Director of the Chesapeake Conservancy, said to the circle who had gathered in celebration of the launch.  “We’ve been looking to implement something like this so folks can get out into the John Smith trail, which for those who don’t know is actually a National water trail, and become involved in protecting the Bay.”

Joel then took out his iPhone and showed us a free app  for the National Oceanic and Atmospheric Administration’s (NOAA) Interpretative Buoy System that lets you choose a particular Smartbuoy from a menu. You may then listen to it tell you all sorts of  information, like wind and water speed and direction, air and water temperatures, even dissolved oxygen content measured in deciliters if that’s what you’re after.

“There are a lot of creative ways to interact with the Bay now, so that’s very exciting and means positive growth in land stewardship for the Chesapeake,” Joel continued.  “And this expedition with Outward Bound, the opportunities for educating youth in an adventure setting–this is one of those great creative innovations that will mark a new era in protecting the Bay.” 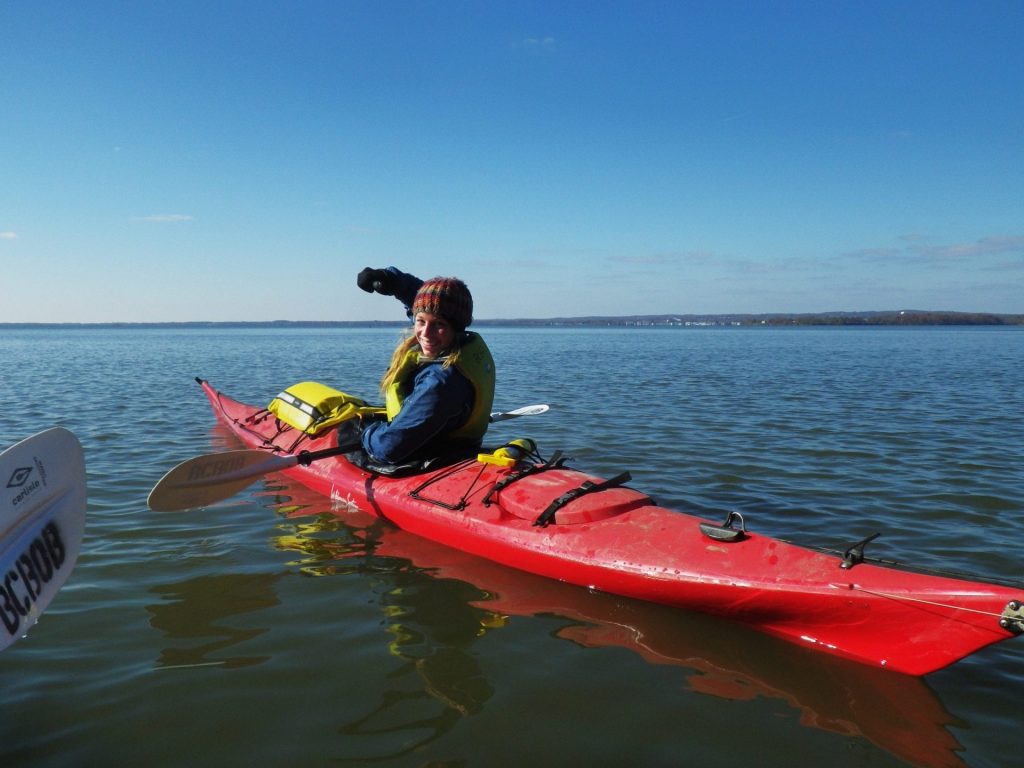 Our route began northeast of Baltimore at the mouth of the Susquehanna River, and ended some 30 miles later with a jaunt up the Sassafras. It might not seem like 30 miles from start to finish on the map, but with sea kayaking you cannot track ‘as the crow flies’, meaning you cannot just point the nose of your boat in the direction you’re going and paddle. To limit the amount of time spent on open water, which is an inherently unsafe way to travel (unpredictable hazards could present barriers to proper risk management), much of our time was spent hugging the shoreline.

Like I said, travelling in a pack of 15 professional outdoors enthusiasts makes some noise. It certainly provided an avenue to attain inflated capacities for goofiness the uproar from which ruffled the tail feathers of more than a few Great Blue Herons. We kidded about the significance of being on good ole Johnny Smith’s ‘historical water way’, and, using only details from a fictional animated motion picture, questioned the true priorities of the Captain who managed to score dates with Pocahontas when he should rather be charting the topography and settlements of a large chunk of the New World.

Clearly the good Captain had his priorities straight, after all.  He managed to publish this map in 1612 which became  one of the most important resources to early colonists of the Mid-Atlantic and points beyond, opening the region for exploration and trade.

If you get a moment, spend some time with the large print version of John Smith’s map.

If you get another moment you should read about his wild adventures. He was an intriguing guy: an explorer with a particularly pronounced determination to quest and to meticulously recount.

In the spirit of the Captain, I decided to include a paste from my own journal:

It was about 6 AM when our lead instructor, Tom Polk, told us the weather was too harsh and we couldn’t leave the island.

“Okay, folks, good morning.”  Tom’s voice is alert but unworried, his robust all-white mustache moves but his eyes do not. 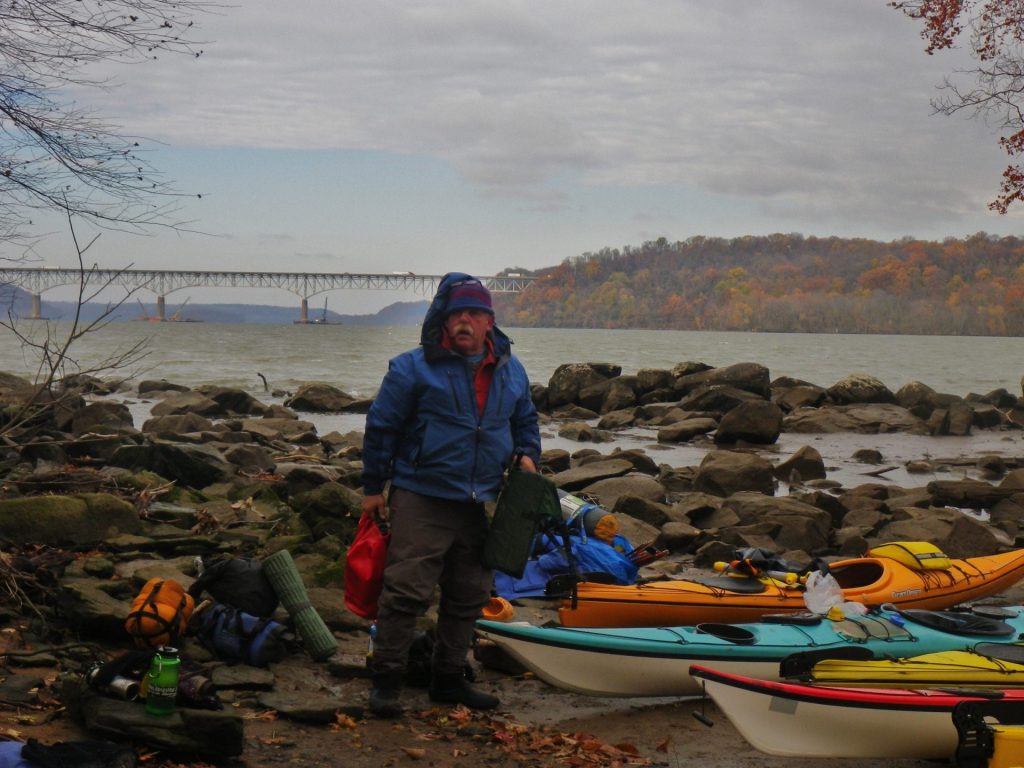 I had been lying on my belly resting my chin on an up-curled portion of sleeping pad, watching the wind and rain pelt the few tents and tarps in my view with a pre-dawn lazy focus. I see Tom’s legs, which I know are Tom’s legs because they are naked from the knees down—it is November and he is wearing shorts and sandals—stomp towards us across a wetness of brown and yellow beech leaves and thrust his head under our tarp. Earthworm bodies in sleeping bags wiggle and open their eyes. Katie, sleeping next to me, rolls over and surveys the camp site under the foot-high eve of the tarp.

“Oh my God,” she moaned in a morning voice, “I can’t believe our tarp ripped out of the ground last night.”

I had watched Klinger’s bare feet step between pokey shrubs and get spattered by the storm as he reattached it.

“Who’s tent went flying in the middle of the night?” 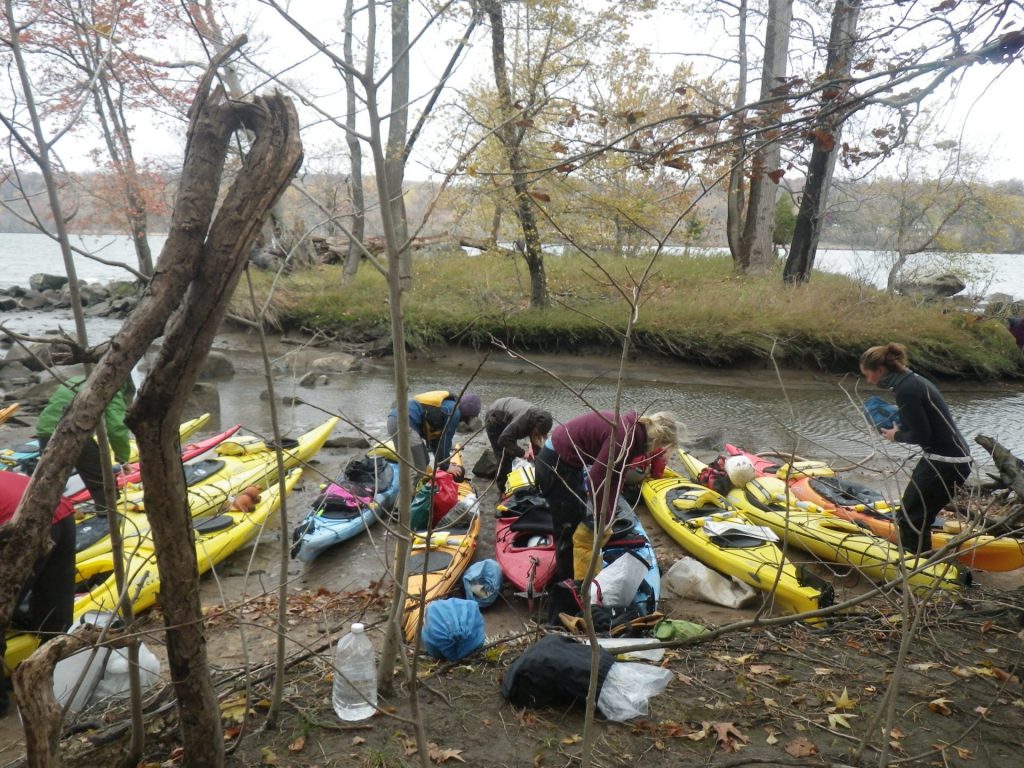 Another crewmate’s tent had become overturned from the heavy late night winds that tore through our sleep spot on Garrett Island, a private island located at the mouth of the Susquehanna River that Outward Bound has been granted access to as a strategic campsite on our soon-to-be-official sea kayaking expeditions. I had awakened then, too, to squint through a gusty haze at what I made out to be two individuals weaving this way and that carrying a fully-erect tent, like two people carrying a billowing, weightless igloo which was also somehow a kite, inland in search of somewhere wind-shielded. They disappeared into a darkness of trees and I put myself back to sleep.

Personally, I had no reservations about going on this expedition.  I have tried my hand at white water kayaking and other high impact sports.  But you know what?  Expedition kayaking is tough. 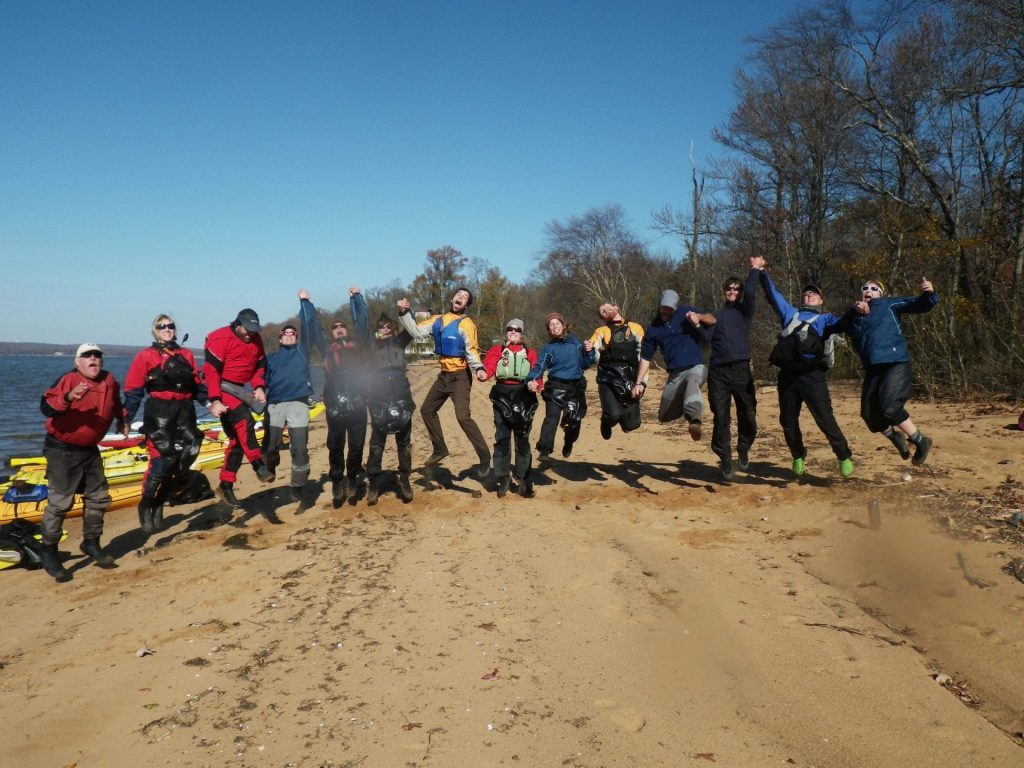 Okay, perhaps it wasn’t tough.  But it was challenging. Though our average mileage per day was nothing to run away from, the route includes a 6-mile crossing (open water!) within which is a crossing of a major shipping channel.  The Bay is subject to tidal movements which can work against you at certain times of the day.  And, the weather will do silly and exciting things, like break big choppy waves over your bow or rocket-launch your tent. Plus, there are heaps of different types of gear and equipment to use, a system of traffic markers and boater signals to learn, and everyone must perform something called a ‘Wet Exit‘ at least once.

That’s just speaking of paddling-specific challenges.  I could tell you about other enormous threats, like that of human-sized birds, but I elect to show you. 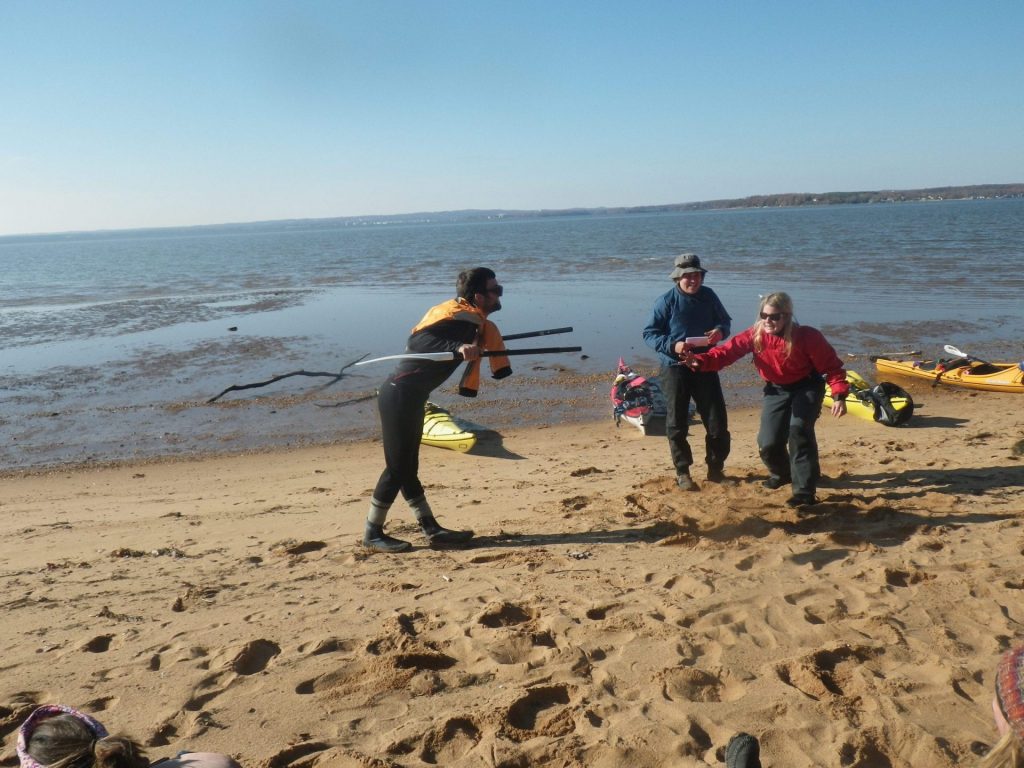 A TRIP WITH PURPOSE

Here’s something I think is cool: The Chesapeake Conservancy’s website states, “Just as the Appalachian National Scenic Trail provided a framework for large landscape conservation since 1920, so can the John Smith Trail.”  They make a salient point–the idea is “If you know it, you’ll protect it.”  After having followed the trail for five days, however, I can honestly say I’m not sure how it would have transpired–how I would have “gotten to know it”– without a formal crew and specialized instruction.  The technical ease of hitting the AT with a buddy and a backpack is a considerably less involved endeavor than plunging into the world of water navigation, at least in any meaningful way.

Something you become very familiar with when you enter the Outward Bound world is the definition of an expedition: It’s not just a trip, it’s a trip with a purpose.  The distinction this draws between wilderness recreating and the shape our courses take is that there is an intended progression, a structure to the journey that encourages leadership in its crew members.  Be it a journey of backpacking, canoeing, dog sledding, canyoneering, sea kayaking, or any number of activities, the idea is that you are part of a group that needs to function as a whole.  The beauty is that the group starts out by learning the absolute basics of back country travel, and by the end it is managing the whole show from A to Z. 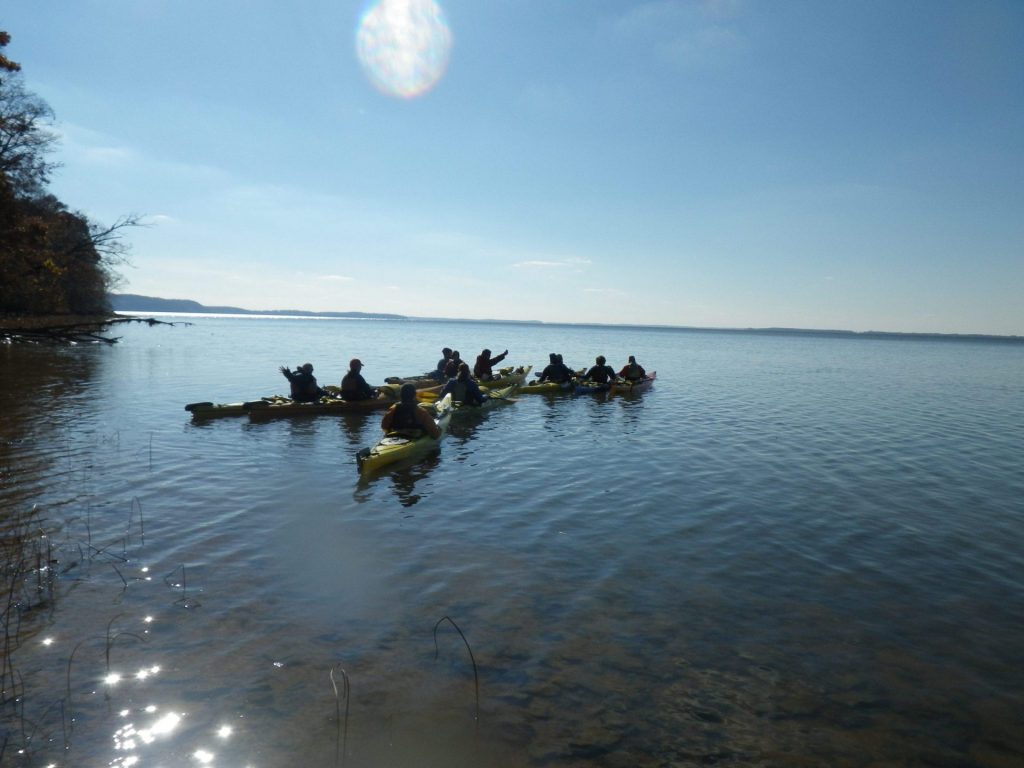 Outward Bound is often mistaken as a wilderness survival school, but that’s not what we offer.  We are an outdoor leadership school dedicated to experiential learning, or learning-by-doing.  What we have seen is that the wilderness is the best backdrop or “classroom” for this type of learning: the kind of learning that takes you out of your comfort zones and delivers real inspiration for personal growth.

And here, look.   You don’t have to seek the exotic.  The Chesapeake is accessible.  It is engaging. And when you get to know it, it will tell you it is wild. 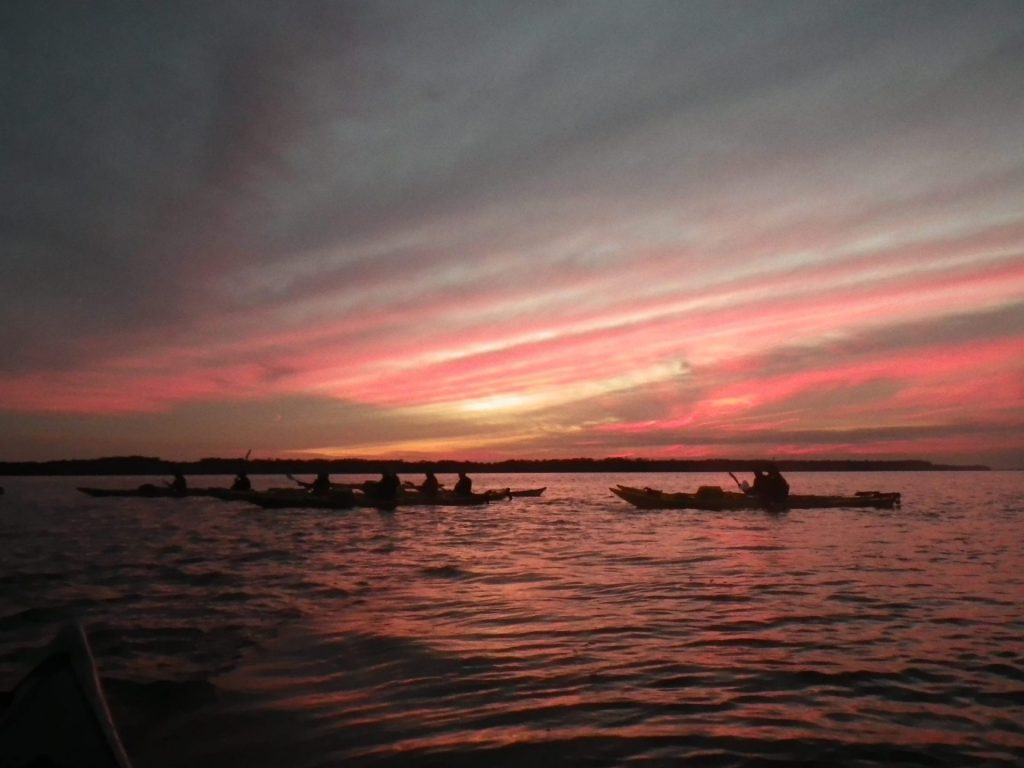 Future expeditions for Open Enrollment students (general public), 16-18 years and adults 18+, will spend 6-days paddling this course. This same program is offered to school groups and organizations as  5-day expeditions to harmonize nicely with the school week.  Courses are set to run summer 2013.